Few years ago, I created with a fellow student an interactive visualisation of terrorist attacks across the globe.

The project rose from an image that I shared with a friend. The image compared the number of deaths caused by hunting, and the number of people dead in terrorist attacks. The data was restricted to France only. My friend found the image interesting, but asked a fundamental question:

Indeed, I had no idea. Therefore, I thought about it, looked up for accurate numbers. In the meantime, I started to follow a course about data visualization using d3.js, and decided to merge the two together. This is how everything started.

The final project is available publicly online, known as Terrovizm, which works on mobile but is not nice to use with a small screen and a low-power device. This tool uses the database built by the Global Terrorism Database. Therefore, you may or may not agree on their definition of terrorism:

The threatened or actual use of illegal force and violence by a non-state actor to attain a political, economic, religious, or social goal through fear, coercion, or intimidation.

When building the interactive infographics, we took the database as-is, not redefining what is terrorism or not.

You can read more on the project and access the sources in the Terrovizm Github repository.

The visualization looks likes the following: 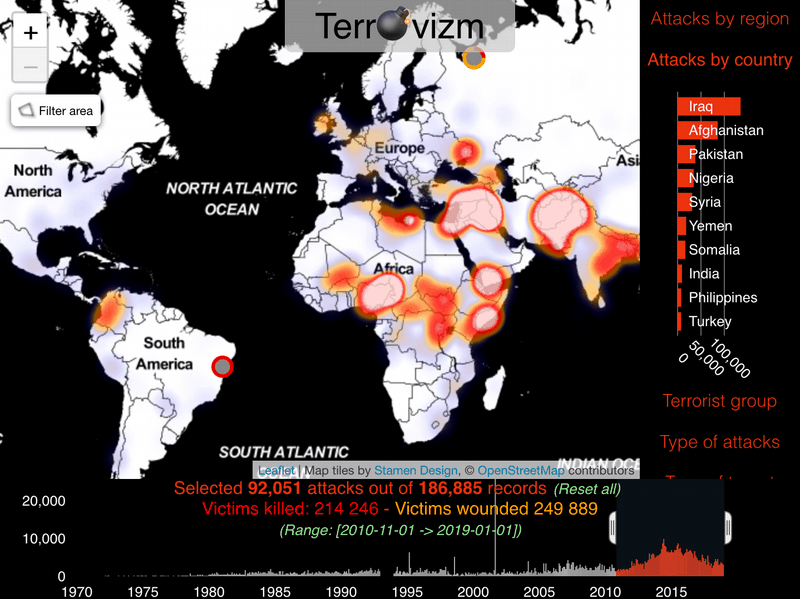 It features several useful parts and tools to explore the database:

What about it now?

I recently updated the database using the version including data up to December 2018. The 2020 release, which includes year 2019, is restricted to the purchase of a commercial license.

Yes, in France, hunting kills more (humans) than terrorism. This is a fact, and I will not go into politics, saying that terrorism has been a very convenient motive in France to create law after law to reduce individual rights and freedoms.